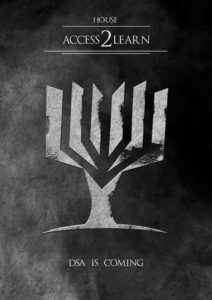 Before I start with this blog, I just want to say that I will try to keep it as spoiler free as possible! On a personal note, I never thought I would be happy to hear the words “Winter is here”!

I know what you’re thinking dear readers – why on Earth is a company like Access2Learn, who supports disabled students at university through Disabled Students Allowances, publishing a blog about Game of Thrones? Well, like the sigil of House Mormont, please bear with us – ok, I’m sorry, that was the worst pun ever. 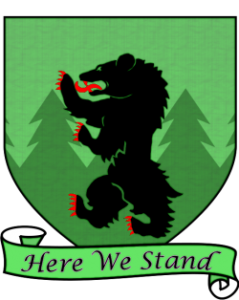 The Sigil of House Mormont

But my point? There are two reasons to write a blog about George R.R. Martin’s epic creation. One – Martin’s depiction of characters who would by today’s standards be classed as disabled, especially when they interact with the infamously vicious and ableist society depicted in Game of Thrones, are portrayed in incredible fashion when, far from being pushed to the side and forgotten or just there for comic relief as is the unfortunate norm for such characters, they are portrayed as tough, intelligent and adaptive, able to command a huge presence within Westeros and Essos. The second reason – well, I just love Game of Thrones!

Perhaps the most immediately obvious portrayal of disability in Game of Thrones, as well as being my favourite character in the entire series, is Tyrion Lannister – otherwise known as ‘Imp’, ‘Half-man’ and various other insults pertaining to his dwarfism. Yet despite being some 2 feet shorter than most other of the main characters in Westeros (3 if you count ‘The Mountain’ – maybe even 4 if you’ve read the books!), Tyrion casts one of the largest shadows over the fictional world of Game of Thrones, not only surviving against all odds, but thriving, becoming one of the most powerful characters in Westeros and Essos. 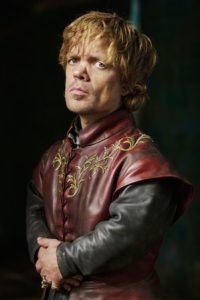 Unfortunately, Tyrion is treated with neglect, scorn and at times even hatred by members of his family, especially by his father, Tywin, who attempts more than once in the show to have his son killed, by ordering him to lead barbarian tribes into battle, making him responsible for the defence of King’s Landing and then sentencing him to death for a crime he didn’t commit – and why? Simple – Tyrion is a dwarf. During an incredible scene at his trial, when the hatred between Tyrion and his father boils over, Tyrion responds to his father’s demands that he confess to his imagined crimes with “I’m guilty of a far more monstrous crime! I’m guilty … of being a dwarf!”

This is only one example of the relentless discrimination that a dwarf faces in the brutal and ableist society of Westeros/Essos. Tyrion is constantly looked down upon, insulted and tormented by his peers; including his sister Cersei, his cousin Lancel (who comes to regret it, more on that later), and many others. As a dwarf, he is seen as being beneath notice or reward, an illegitimate being. As he famously remarks to Jon Snow in Season One, who faces his own discrimination on account of being a ‘bastard’ and therefore unable to claim lands and also treated like an illegitimate being, “All Dwarves are bastards in their father’s eyes”.

However, despite the overwhelming prejudice a dwarf faces in Westeros, it doesn’t stop Tyrion from playing the Game of Thrones like a champion. For far from being portrayed in the typical way that a dwarf would be in most films/TV shows, Tyrion is shown to have great charisma, vast intelligence and lightening quick wit, all of which he uses to gain allies, outmanoeuvre his enemies and gain power within Westeros. Tyrion manages to outmanoeuvre Queen Cersei by removing her lackeys from the Game, gain the allegiance of the sellsword Bronn, talk his way out of certain death in the Vale and at the hands of the Hill Tribes, orchestrate the successful defense of King’s Landing and climb the ladder of power almost to the peak on two occasions, becoming Hand of the King/Queen at various stages in the film series. Despite being the shortest player in the Game of Thrones, Tyrion is one of the biggest winners – and easily one of the most beloved characters. 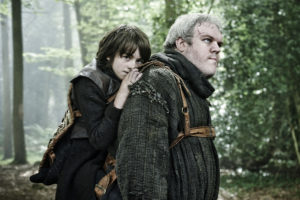 Then there’s characters such as Hodor, the “sweet giant”, the seven-foot tall servant to the Starks who can only utter one word; his name, “Hodor”. While one’s first impression of such a man might be underwhelming, given the unfortunate tendency to judge a person’s intellect by their capacity to speak, Hodor quickly establishes himself as one of the most beloved characters in the series as he tends to Bran Stark, who is left paralysed from the waist down after a tragic fall early in the series. Initially, Bran is distraught by his injury and the realisation that’d he’ll never walk again, and remarks to his brother Robb that he’d rather die than live as ‘a cripple’, much to Robb’s sadness. However, it is not long before he discovers he can still ride on horseback (with a little help from Tyrion), and eventually he discovers within himself the magical powers of a warg and the power of ‘Greensight’.

Perhaps it is poetic justice that the man that caused the fall that crippled Bran, the Kingslayer Jaime Lannister, is himself left handicapped when his hand is cut off (in events that I won’t spoil). Jaime, who was once hailed as one of the finest fighters in Westeros, is convinced that losing his sword-hand is the end of his fighting days, remarking that ‘the Kingslayer can’t even slay a pidgeon’ – an ironic similarity to Bran, whom he crippled. However, also like Bran, Jaime’s loss of his hand turns out to be crucial to his character development, and he transitions from one of the most despised characters to a fan-favourite.

As you can see, there are many examples of disability in Game of Thrones. Many of them are inflicted by injury, such as Bran and Jaime, others by trauma like Hodor. Few known characters in the Game of Thrones world are born with disabilities, such as Tyrion, whose dwarfism was obvious all his life. All of these characters face hostility in the excessive ableism of the Game of Thrones world, where power is the name of the game. But all of these characters demonstrate tremendous power in various ways; Tyrion by his charisma and intelligence, Hodor by his incredible physical strength, Bran with his magic and Jaime by his strength of will and resolve to learn to fight with his other hand, even if it means getting slapped about at first by a certain sellsword. 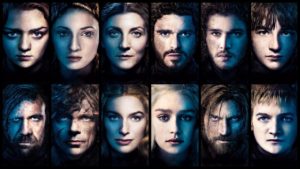 Some of the many faces of Game of Thrones

Truth be told, all of these characters demonstrate incredible resolve and strength within the unforgiving world of Game of Thrones. The phenomenal storytelling, character development and intrigue that George R.R. Martin creates aside for just a moment, the fact that characters who by modern standards would qualify as disabled are portrayed in such a positive fashion; largely independent, deep, strong characters who aren’t just there to make people laugh, nor are they shunted aside in favour of those who would by conventional wisdom fit the ‘normal’ bill.

Now that Winter Has Come at last in the form of the long awaited 7th season, we at Access2learn thought it appropriate to share this blog celebrating the enlightened, empowering fashion with which disabilities are portrayed in Martin’s masterpiece.

It’s a shame there is no DSA in Game of Thrones … although mind you, if there was, we’d probably end up going the way of Ned Stark before long … you know what, never mind!